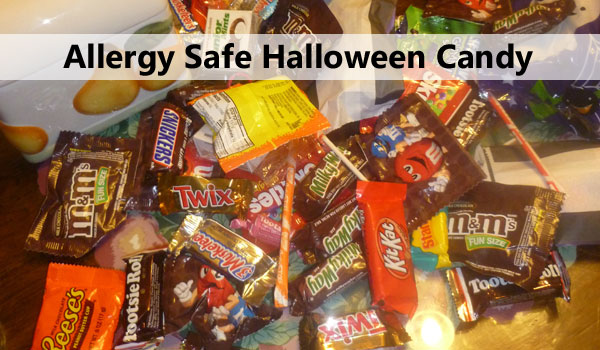 When I wrote my first blog for Crunchy Moms about peanut allergies, my husband and I got into two heated debates.

I stand firm, if you have a child with a severe allergy, it is not out of line to ask your direct neighbors to hand out safe candy. Trick or treating is for children. When there are so many safe candy choices readily available for the same price, why wouldn’t you offer something safe if requested, or if you are knowledgeable about allergies? What does it matter to you, the adult distributing the candy, what type of candy it is? Its not for you or your kids; its for the kids who visit your home. Offering allergen free choices makes you a better host by making Halloween more fun for the children who often can’t eat most of their Halloween candy.  Twenty-five years later, I remember the fear and disappointment when a neighbor presented bowl of all unsafe candy.

I’ll use my family as an example to show how an average trick or treating haul is reduced for a child with allergies. The picture with this post is my kids’ Halloween candy from last year.  I am allergic to wheat, eggs, and nuts, so let’s see what a child like me can eat out of this big collection.

As far as actual nuts are concerned, only one (scary) Reese’s and Snickers made their way home.  But M&M’s “may contain peanuts.”  That’s nine treats out.

Eggs are in all those Milky Ways and 3 Musketeers, so minus eleven treats.

Wheat allergy means say goodbye to Kit Kat and Twix — four additional candies gone.  Pretty much all of the chocolate is now out, but if a child was allergic to milk, then everything with milk chocolate is out anyway.

Now, the Junior Mints package said egg may be present and lists both “confectioner’s glaze” and “modified food starch,” so those are unsafe, too. Take away two more treats.

Twenty-six treats are gone out of forty-three. That’s 62%.

Here’s what remains: an apple, a mini box of raisins, three pixi sticks, one pack of Life Saver gummies, six Tootise Rolls, three packs of Skittles, one Starbrust, and one pack of Sour Patch. All together that is seventeen treats. This just numbers; there are obvious differences in size and appeal of the remaining treats, too.  Also, bear in mind, this is candy collected by two children, so it implies forced trading between them. As a child, it did not feel good knowing I would have two-thirds less if my brother and sister hadn’t been forced to trade with me.

Imagine how your children would feel if you had to take away 62% of their Halloween candy? True, some families do this for altruistic reasons, but I personally couldn’t give away all of my young child’s candy to make a point about charity. Hide it and get rid of it a week later after they’ve forgotten about? Sure! But take it away the night they get it? That’s different. I’ve lived through that, and it sucks.  If I’m going to make a point about charity, we will trick or treat for UNICEF instead.

As a side note, I’m super excited to report that, unlike those Junior Mints, Skittles now list that they use corn starch (rather than modified food starch that could be wheat) and Starbusts, while they still list modified food starch, say they are gluten-free. Skittles also doesn’t use confectioner’s glaze (which can contain egg). I hadn’t checked back on these two candies for years. Way to go Wrigley’s company for clarifying your labels!

Back at the start, I said my husband and I had two big debates.  If safe candy is in the same bowl with unsafe candy, does it all become unsafe? Are those seventeen safe treats now unsafe because they’ve been mingling with the other twenty-six?

My husband and I each had a theory, but when I tried to find the answer on line, I couldn’t find one.

I hope to speak to an allergist to find a concrete answer (and I’ll share it if I do), but for now, courtesy would suggest: If you are going to offer two types of treats, one safe and one not, then put them in two different bowls.  Part of the fun of Halloween is feeling scared, but a child should not feel true fear reaching into your treat bowl.