Anti-GMOs? Do You Even Have An IQ? 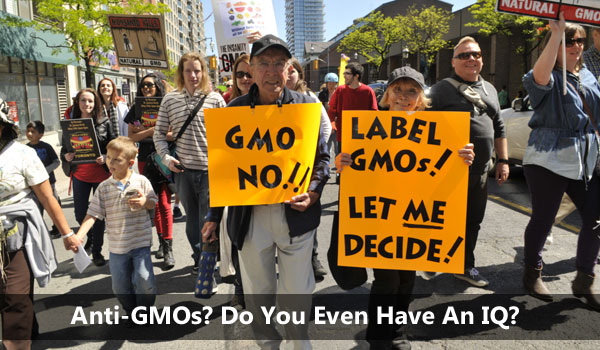 After reading a series of idiotic articles pertaining to GMOs, I couldn’t help but feel the need to share my opinions with the Crunchy Moms community. After all, I assume the majority of those here are either against or take some issue with GMOs, because isn’t that kind of in the definition of a crunchy mom?

I realize that many people think those of us that are considered crunchy are hippies, or crazy, or whatever negative connotation has been attached to “our kind” these days, but sometimes there are some people that just push my buttons to no end. I recently read a few articles (by the same man, so I’m not shocked the ridiculousness of this is perpetrated in more than one article) that really just could not be ignored.

He is convinced and set on informing the rest of the world that people who are opposed to GMOs are not opposed to them based on science, but based on profits and fear. That these leaders of the anti-GMO movement are not basing their cause on actual science, because I guess he believes there is literally no proof that GMOs are unsafe (even though there is no proof it IS safe, let’s not think about that though, because then we might void his perfectly valid and scientific evidence!) and that they are using fear to bully and persuade consumers and the government to ban together and prevent this continued science. This savior of humanity, that he believes GMOs to be. After all, GMOs are only about sustainability and who are we to question otherwise?

This man believes that there are diabolic agendas behind the anti-GMO movement, and that because certain leaders have said things (that he considers to be the type of secret, in confidence conversations they won’t want us to hear for fear of exposing their devious schemes) such things as that labeling is the first and best step to banning GM foods…wow. Are you horrified by this development? To think that someone who wants these things labeled, because they consider them dangerous, would want these foods banned. It’s just…unthinkable. Um, hello?

Worse, not only does he believe we rely on fear, as opposed to his scientific way of thinking, but that because of our low intelligence that fuels this anti-GMO crusade, we are ruining it for others! That because we fear GMOs that are “perfectly safe”, that people have to go out in protective gear to “water” our foods with those pesky pesticides, that really aren’t so bad for us, we are preventing this science from continuing. This science that could save lives! Or, you know, take them. But let’s not split hairs! Because that just wouldn’t be scientific or intelligent. And this need to have labels, isn’t about transparency at all. It’s about DESTRUCTION! We don’t want sustainability, we don’t want cures for the starving, we don’t want science. We’re just crazy, hippie, mother of the Earth people with low IQs. Because really, if we had an IQ we wouldn’t be opposed to GMOs. They’re identical to those that grow naturally….except for the fact, ya know, that they can resist all sorts of disease. Other then that, they’re identical!

Oh, how I love when people call me unintelligent because I don’t feel there is enough evidence to prove GMOs are safe to feed my family. Even better, I love that because I feel I have the right to know what I’m spending MY money on, for MY family to eat that I’m only out to “demonize and destroy”! Shame on me for wanting companies to disclose what they use. It’s my fault people will continue to starve I guess, because my low intelligent behind won’t give in and accept whatever they deem fit to put into MY food. It is so destructive of me to feel that when I give a company my money, that I have some rights or say in the food I’m spending my money on. I mean, really, how ridiculous am I? What gall to question companies that know better than me! They’ve never tried to trick, swindle, or cut corners at my expense, right? They only have my best interest at heart. Companies aren’t out for profits! What lunacy! How ever will I sleep tonight?