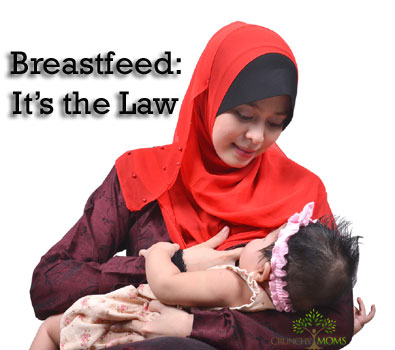 Mothers in the United Arab Emirates are now required by law to breastfeed their children until the age of two. As reported by The National, a three-day debate preceded the passing of this mandatory breastfeeding clause for a newly issued Child Rights Law.

This law was approved despite the apprehension of Federal National Council ministers, such as Mariam Al Roumi, that this clause could be used for husbands to sue their wives if they do not breastfeed.

The FNC has mentioned that this law comes from the Quran. While Islam does encourage mothers to breastfeed until the age of two, it is not mandatory.

“Mothers shall breastfeed their children for two whole years, for those who wish to complete the term” (2:233)

Mother’s groups in the UAE have been very vocal that mothers need support to breastfeed, but not laws forcing them to do so. This clause is trying to compel something that is natural. An extraordinary act, that that mothers have done for thousands of years. Nonetheless that act, is a choice. Every woman has the right to decide if she wants to breastfeed.

It seems that the Federal National Council forgot that there are two sides to this coin:  A child and its mother. Yes, an infant is entitled to the strongest start possible in life, but a mother also has the right to decide what is actually best for her own child. If you want to promote healthy breastfeeding relationships, provide education and proper support. Scare tactics will only promote resentment and insecurities.

Marie-Claire Bakker, a member of the La Leche League and cultural ethnologist, said that the law would be harmful to families by placing more stress on new mothers. That exceptional bond between a mother and child cannot be mandated; it is something that has to be created. Breastfeeding is difficult, even when you want to do it. How can you propose to punish a woman that already feels the stigma to breastfeed, but simply cannot?

Breastfeeding is a cause I support wholeheartedly. I think that it is a beautiful yet difficult road, which I openly invite every mother to follow. Yet, I fully believe that it is a personal choice, which every mother must be allowed to make. What are your thoughts on the subject?   Is it fair to put a child’s right to be breastfed above the mother’s right to decide? Should the government get involved with a women’s right to breastfeed at all?  Have we missed the point of this new clause completely?

All reports of this new “law” have come from the same source “The National.” Upon talking to UAE nationals, there is speculation on the validity of the statements that this has actually been included in the new Child’s Rights law. No mainstream media has picked this story up. As reported directly from Haleej Times “ The law defines basic rights of children, including the right to a safe life, medical attention and care and education. It prohibits child labor and the exploitation of children in begging.” There is no specific mention of breastfeeding, and its requirement for two years. I have actually been informed that a United Arab Emirates government website has information listed regarding meals for infants below the age of 18 months.

We will continue to monitor this story closely and provide any updates, as new information is received.

Kezia is originally from South Africa and spent her life traveling around the globe. She has recently made the move from Dallas, Texas to Denver, Colorado. She lives there with her husband and son. Soon to be the mom of two, Kezia is excited looking forward to a VBAC in mid 2014.