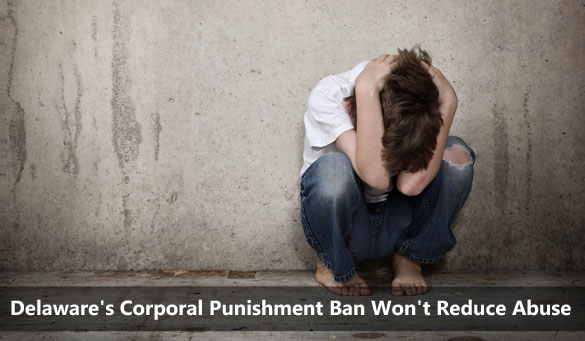 In an attempt to reduce child abuse, Delaware recently became the first state to outlaw corporal punishment, but is the legislation useful in respect to the enormity of the problem?  Those in favor of corporal punishment mourn their choice to spank and the trust to keep the pain within reason.  While society should not just blindly trust parents to always keep their cool, a proclamation that spanking is illegal is not the solution for child abuse.

First of all, the law itself may be flawed.  Delaware’s new law is said to remove parents’ option to use corporal punishment to discipline their children. Yet, Nicole Theis of the Delaware Family Policy Council points out that the law is “hinged” on the words “pain” and “reasonable force,” both of which are subjective.  Meanwhile, the Home School Legal Defense Association stated that Delaware law already banned the same actions in previous laws.

In my home state of Maine, parents raise their children as they see fit – until their actions deteriorate into abuse or neglect.  But, where is that line?  Social workers, medical professionals, lawyers, and police all agree that the line to determine abuse is blurry.  Maine law allows corporal punishment until it causes harm seen through evidence on the body or can be substantiated as emotional abuse.  There doesn’t appear to be much practical difference between Maine and Delaware law.

The Delaware policy makers outlawed all the actions that result in physical abuse.  They redefined child abuse within the law and attached to it more concrete punishments.  These changes will help to put behind bars individuals who harm children due to pedophilia or psychopathic tendencies. However, the politicians overlooked the most important piece of the puzzle: Anyone can become a perpetrator of child abuse.  Childhelp states that “Child abuse occurs at every socioeconomic level, across ethnic and cultural lines, within all religions and at all levels of education.”  Ordinary people harm their children:  Families caught in a cycle of abuse.  Families struggling with substance abuse.  Families stressed to their limits.  Families in crisis due to lost jobs, terminal illness, isolation, mental illness.

Picture a family.  A married couple who work opposite shifts to make ends meet.  The mother is exhausted from working an evening shift after caring for her child during the day.  They have no local family support.  They have no time for friends.  They have no money or social connections to hire a sitter.  They haven’t had a date since before their child was born.  Their child is going through a normal developmental stage of defiance, maybe “the terrible twos.”  The mother constantly tells her son not to pull the photo albums off the shelf.  She moves the albums out of reach.  One day, she returns from the bathroom to find photos all over the floor, some torn.  Her son has used a chair to reach the albums.  For a moment she loses control and strikes her child across the face, leaving a hand print on the cheek and bruising behind the ear.

Does this mother deserve a jail sentence?  Does this child need to be removed from his mother?

Delaware’s new law does not help this family.  Families like the above need community supports and education, not a threat of prison.

Lawmakers look at the problem backwards.  They expend all their efforts to catch abuse in the instant it occurs.  They state that harming a child is illegal. They offer a threat of punishment, but no practical resources to prevent these families from arriving in the moment when the abuse occurs.

When my children are screaming and flailing, a threat from the government does not prevent me from harming them.  My love and attachment to my children does.  My stability in having my needs met by my husband, and family, and friends does.  My knowledge of the effects of abuse does.  My understanding of child development does.  My awareness of strategies to handle our emotions taught to me by respected community members does.

The government must advocate for community resources that provide education and support for families, by supporting those suffering from poverty, mental illness, and substance abuse as well as just supporting parents.  Instead of vague and redundant laws that threaten to break apart families desperate for help, we need parent education that starts earlier and is more accessible and visible to all families.  We need mandatory, respectable maternity leaves allowing for appropriate attachment and transition.  We need funding for home visitors to work extensively with all families, not just those deemed at the highest risk, to reduce the stress of parenting.  We need to attack the problem of abuse at the source, rather than waiting to punish after it has occurred.

Yet, the government takes on the role of the bully.  “If you hit your child,” the government threatens, “then we will hit you harder.”  We know this approach does not work with children, so much so that the laws in question outlaw it!  Why is a threat what the government offers to parents?  Why do we allow it?  Parents, stand up to the bully and demand the legislation that prevents child abuse before it occurs.