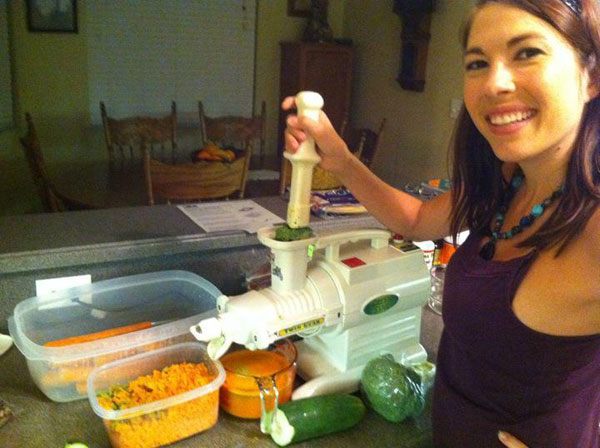 Confession time: My mom gave me a really, really nice juicer for Christmas nearly 3 years ago that I had never used!  I had good intentions, but it just seemed like an expensive way to make some fresh apple or orange juice.  I put off trying it again and again, until I finally did it!

I tried this recipe for sinusitis, which I found online in a Facebook group.

This was not only my first time juicing, it was also my first time buying and handling (regular, not baby) kale, cilantro, and ginger!  Needless to say, a girl’s gotta call her Mama! She is not an expert, but she has more experience than I.  Here is what I asked and how she answered.

Past the actual prep work, it was pretty easy to make juice.  I just pulled out the “food plunger” and threw stuff down into the tube.  Then, I pushed the fruits and vegetables down.  I started with the kale and cilantro.  A slow trickle of green juice began to come out, but I think I almost jammed the machine! I continued to put more produce in, and kept pushing.  It started flowing a little better, and within 3 minutes, I had a full serving of Sinus Clearing Juice!

How was the juice? It was bright bright green- just like what you see on TV when people juice wheat grass.  I won’t say it’s something I will crave, but it was tolerable, somewhat tart.  Knowing there are probable health benefits helps it taste better.  I think I will add an apple next time to sweeten it a bit.   I’ll try soon!

Did it break up the congestion? Well, I have lots of sneezing and the nose is running!  Hoping it is a magic juice!

Have you tried juicing? Share your tips and tricks!

I’m a Moderately Crunchy Mama to two girls (3 & 1), taking baby steps every day. Some of my friends see me as an authority on natural parenting, but I’m just like you- trying new things, sometimes getting overwhelmed, and sometimes (shhhh!) throwing some store brand highly refined brown sugar in my granola.