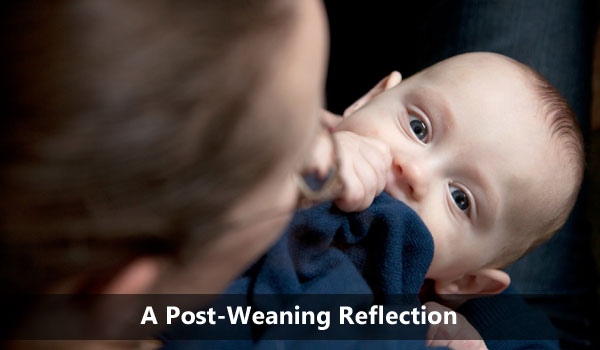 A few days before Thanksgiving, my two year old son cried out for me during nap time. He had fallen asleep on his floor playing trains. I scooped him up and laid his head on my shoulder. Snuggled under a blanket on a living room chair, he slept and I dozed – together like we used to when he was an infant nursing through the night. This sleeping is the closest we will ever be to the nursing we shared just months ago.

If my son wanted to, we’d likely still be nursing today, months past his second birthday. But, his bedtime nursing ended abruptly after his infant cousin came to visit. Completely on his own, my son stopped requesting “boo boos.”

The nursing sensation I miss the most is let down. The ache of let down mirrors the emotional ache of wanting to sooth your child, of love so strong it almost hurts.  Nursing went beyond an embrace in comforting a sad, lonely, scared, hurt, sick, or overtired child.  We shared forced moments of quite as he’d hug my body in the saddle hold and I’d stroke his hair.  In the dim of bed time, wrapped in the smells of his babyhood, I’d tell him stories about himself based on his day. I still hold my children close, breath in their scent, stroke their hair, rub their backs, but nothing is exactly the same as the loving comfort of nurturing them with my own body, of filling them completely with sweetness that satisfies every newborn need.

Now that my children are 2 and 4, my heart melts at the adorable, brilliant, and caring things they do and say. I relish the smiles and excitement and light in their eyes when I show I know them and their needs, that I value and love them. This is what they need now, but it is harder to give than my actual body. Though, I don’t know if I would have believed this those first few weeks postpartum. Yet, its a mother’s prerogative to look at her child – often when he’s asleep – and imagine a time when simple comforts satisfied him completely.

Thanksgiving night, my son cried for me again in his sleep. Overtired and overstimulated from the long day, disorientated sleeping away from home, and sharing a room with his noisy sister, he called out for Mummy. When I came to see him, he wouldn’t stop whimpering, even as I held him in my arms. Even when I said I would stay, he couldn’t quite believe me. I physically ached to nurse him to show him my devotion. Instead, I cradled him in my arms, so similar to our old nursing holds, and held him until he drifted back to sleep.  I stayed that way for two hours, until he repositioned so I could lay down and sleep beside him until morning.  And even though I was tired and sore the next day, I loved every second of it, where we almost had that closeness again.