Why I Ban Battery Toys In Our Home 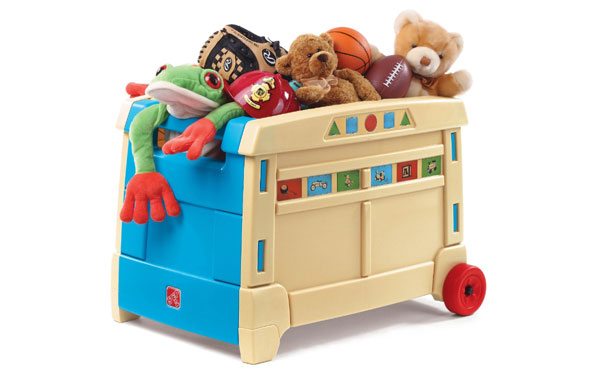 I hate those garish colored battery powered toys that flash and make noise. They make me cranky and mean. I can handle my son banging on pots and pans for hours making music, but five minutes of the electronic music in one those toys and I start to go crazy. I knew even before my son was born that we would not have any toy that needed batteries in our house. It’s  not just because they are irritating, but also because they just aren’t good toys. To me, good toys encourage imagination, open ended play, and they lend themselves to interpretation. Those plastic toys do one thing. You drop a ball or push a button and watch as it sings and lights up, and they play for you.  Kids get bored of them fast, and as a result, parents are forced to buy more toys with slightly different buttons and lights, in the hope of capturing their child’s attention and interest, but they just end up with a house full of expensive plastic junk that nobody wants to play with.

Before our baby was born, my husband and I sat down and wrote out the rules for toys entering our house. We wanted to majority of toys to not be made of plastic. They also needed be versatile and long lasting. The most important rule was no toys that made sound or had flashing lights and needed batteries. Since we have a small house, having a few toys that could be used in many different ways means that our little space isn’t overflowing with toys. It also meant that these toys would naturally grow with our son as he matured and developed his style of play, theses types of toys would lend themselves to his changing needs and the needs of future children we might have. I wanted to create an environment that would force our child to use his imagination and would encourage open ended play.

The key is to look for active toys, which are toys that serve a props to enhance creative play. The majority of our toys get rotated in small baskets into the playroom so our son was not overwhelmed by choices, and it allows objects that have been put away to regain a sense of newness when they come back out.  The toys we have fall into three main categories.

Creation toys  These are toys like wooden blocks, toy cars and trains with tracks, stacking cups, and little wooden figures of animals and people that open up play. Kids can build cities and towns, create stories about what happens there, move their figures around in the little world they created, and at the end of the day, knock it all down and create a whole new world tomorrow.

Pretend play toys   These are toys like a play kitchen stocked with metal pots and pans, wooden spoons and lots of play food, a dress up box , and cloth baby dolls  that allow children to mimic and pretend to do the activities they watch adults do everyday. Pretend play is great for practicing life skills and for gaining an understanding for how social interactions work.

Developmental toys   Things like puzzles, books, art supplies, and musical instruments are all so important. Not only do they teach important skills like problem solving and fine motor skills they help by developing an understanding of complex patterns and skills that are needed to be a creative imaginative child.

By not overwhelming my toddler with flashy lights and loud toys he is able to go into his play room and let his imagination and mood dictate what sort of play he feels like. Unlike a lot of children his age who need someone to tell them what to play with next and how, he doesn’t need direction when it comes to his play.  It is rewarding as a mother to be able to watch my child develop and his imaginative play become more active. By nurtured this skill at a young age he will get bored less often as an older child and do better in school. He’s learned the skill of focusing on one thing for an extended period of time, and how to use creative problem solving and imagination, which are skills that are needed in math, science and language arts. He has also learned that imagination is the greatest toy of all.

Carlie is an aspiring crunchy homesteader in northern Idaho. She's a laid back AP mommy to an amazing two-year old boy and little girl born in February. She enjoys the challenges of raising a child with Celiac disease and multiple food allergies. She runs a crafty business during nap time selling fleece play food at roxyroodle.com