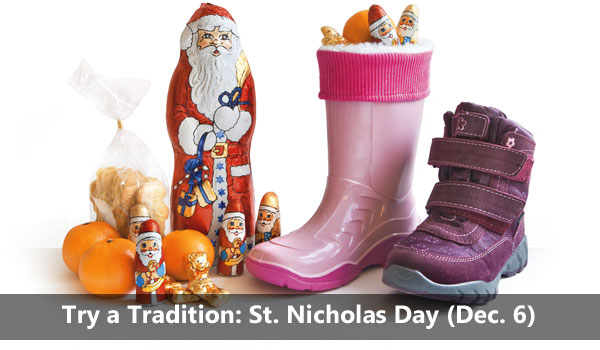 My family hosts exchange students, and our last two have been German speaking (one German and one Swiss).  Our first student from Germany introduced us to the St. Nicholas Day tradition, and our Swiss student has given us a new twist.  I’d like to share the history of this tradition and two ways your family may enjoy trying it in your house on December 6th, compliments of Silja and Gregory.

In the U.S., we call him “Santa Claus,” but did you know Santa was a real man?  He lived during the third century and was Greek (though now his homeland is situated inside the border of Turkey).  He was the son of rich and devout Christian parents who died in an epidemic and left him an orphan as a child.  Evidently, his parents’ religious ways made an impression on him.  Nicholas sold all of his inheritance and lived the rest of his life serving the poor and needy.  Nicholas was made a Bishop of Myra and was widely known for his love of children, and for his care of sailors and those who worked on the sea.

Sadly, Bishop Nicholas was punished and thrown into prison by Roman Emperor Diocletian, who was not pro-Christianity.  Nicholas was eventually released and died on the 6th of December, and the day was soon adopted as a celebration and Nicholas was given the title of “Saint.”

There are many legends of St. Nicholas, and whether true or just complimentary, they help illustrate the nature of his good character.  People across the globe still honor “St. Nick” by celebrating his day of death in various ways.

Of course, we all awoke to find candy and small gifts in our shoes.

Our Swiss son Gregory’s family takes this tradition to the next level.  In the evening, “St. Nicholas” arrives at the front door with this “helper,” a man dressed in brown.  Santa taps on the door with his long walking stick, and the family asks him to enter.  St. Nick carries a book of childrens’ names, and the helper carries a large burlap potato sack.  St. Nick reads from his book, and recalls many good and bad deeds of the children through the year.  If the children have been especially naughty, St. Nick gives his stick to the parents to “punish” the children.  (Gregory states that it is just in fun… The parents do not actually beat their children).   However, if the children have been good, St. Nick pulls candy, oranges, small toys and “Grittbanz,” a sweet pretzel shaped like a man, from his potato sack.  St. Nick then warns the children that if they are “bad” in the coming year, he will “put them in my potato sack and take you to my workshop to work until next Christmas.”  Gregory states that he always had a healthy respect for St. Nicholas, and it’s no wonder!

So, you can take the parts of this tradition you like, and leave the rest.  Personally, I’d leave out the punishment stick and the threats, but I would definitely reward children for specific good behavior or deeds throughout the year.

Will you be celebrating St. Nicholas Day this year?  Have you any interesting traditions of your own?